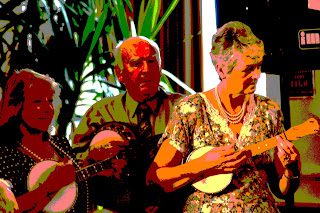 Yes dear readers, you may be aware that the George Formby Society holds a weekend convention in Blackpool four times a year, but tomorrow there will be a one-off one-day convention a little further up the north-west coast of England in Morecambe - at the beautiful old Winter Gardens... read all about it here...

I'll be going, with my lovely 1920's Gibson UB2! Will you? I won't be taking to the stage but I'll be joining in enthusiastically with the "thrash"... You don't need a banjo-uke though - just go! Free entry to this one! And discover what all the fuss is about....
Posted by barefootgypsy at 03:07:00 No comments:

Sarah Maisel - Dream a Little Dream of Me

Well, I've just posted how I didn't get to see Sarah Maisel at the Ukulele Festival of Great Britain last month - she went down a storm - LSH said she was really good! A stern critic... but here she is at Cairns, Australia - that gal's getting around! Great rendition of a great song. I've just learned this... rather simpler arrangement than this though... must get up that neck...

Cheltenham uke festival? I told you it was good!

Yes, I told you the Ukulele Festival of Great Britain was fantastic - and I still haven't finished giving you the details, have I...shame on me - but one of the great artists that I MISSED - because I was in one of James Hill's jazz workshops when she was on - was Sarah Maisel with her jazz set. Although I missed her, I did hear the rousing applause she got during and at the end of her set .... James actually had to pause his teaching until the applause died down! I remember it well... anyway, today I came across Sarah's own write-up about it all - from beginning to end. It's a great write-up, detailed and full of joy and enthusiasm - I tell you, the atmosphere throughout was tremendous.... you can read all about it on her blog, here, and do look at her photos, too - some great pics on there!

Sarah Maisel - Ukulele Festival of Great Britain 2013
Posted by barefootgypsy at 09:04:00 No comments:

Ukulele itch? You just have to scratch it - .

A ukulele itch usually takes the form of an intense urge to explore some hitherto unexplored area of ukulele playing - a different size of instrument, a different wood, a new or highly acclaimed make or uke builder. When it comes to wooden ukes I have been very restrained - I haven't bought one for exactly a year. I've bought banjo-ukes, but that's another matter! No, the last wooden uke I bought was a soprano, and I went for a Kiwaya KTS-4. It's Japanese, beautifully made and I love it; a Martin style O copy, it stands well against similar instruments. It gets equal play time with my concert uke, a Tanglewood laminate with a beautiful tone - and both are strung with Ken Middleton's Living Water 100% fluorocarbon strings. Simply beautiful, a bell-like chiming sound....

But - there's this itch now.... to explore electro-acoustic. And I was wondering whether my preference for concert and soprano sized ukes over the tenor still stands. So, a few weeks ago now, I phoned Mike, the ukulele friendly bloke at my favourite music shop to find out what electro-acoustics they had in stock? A Luna tenor and a Lani concert. And along I went to have a play. They know me up there - and they don't mind me strumming and picking away for an hour... I've bought four ukes in the last twelve months from them already, including a very nice vintage banjo-uke and a gift for a friend...

Well, eventually I was decided, about the tenor versus concert thing anyway... and I'm still more comfortable with the concert size. There isn't actually that much difference in the fret distances, but I found that I do still prefer a concert or soprano uke.

A couple of days late, I was badly in need of cheering up. Now, my wonderful husband is not generally in favour of me increasing my little family of ukuleles - he just doesn't get it... they don't, do they? But he disappeared "to get petrol" and returned with the concert electro-acoustic he knew I'd been trying out in the shop. Well... I was overwhelmed, of course - what a lovely surprise, what a kind and thoughtful gift. The tears fell. And off we went for a couple of days away in the Lincolnshire countryside.

We stayed in Horncastle, an historic little town renowned as a centre for antique shops. Wandering around exploring on the first evening, we happened across a shop, the windows all barred - I peered inside - vintage guitars - everywhere. In rows, on the walls - and just in view of the window, one ukulele, a soprano. It had a fitting for an amp lead... an electro-acoustic uke! More than that I couldn't tell - but it looked like a spruce top. It looked interesting - very interesting.

Want to know what happened? I'll tell you... later... I promise!

Email ThisBlogThis!Share to TwitterShare to FacebookShare to Pinterest
Labels: electro-acoustic

Been practising... using my practice file... and I have managed to learn some of the things I listed a couple of months ago, so I can play them without a sheet in front of me. It feels good to have nailed a few targets - for example:-

Ukulelezaza's tab for the chord melody version of Mr Sandman,
Twilight Time,
Til There Was You,
Dream a Little Dream of Me,
Whispering

Time to look at a few new targets!

I haven't posted here for a week or two - life has been pretty hectic and I wanted to work hard on learning some pieces. I must say, though, I do appreciate you looking in, and I look forward to comments, though I can't promise to publish every single one, especially if there are links to stuff that doesn't really fit in my blog. And I've been feeling a bit subdued - you know how life is just like that sometimes? Sure you do... and LSH (Long-Suffering-Husband) and I have been out and about quite a bit lately; short breaks, taking advantage of the nice weather to see a bit more of the country... but I have had a strum almost every day, a little one or a long one, it's fine as long as long as I can play a uke for a while.

I mean to do another post on the Ukulele Festival of Great Britain, held in Cheltenham last month. It's just a while coming, sorry! As I say, a I'm bit subdued and lacking in the necessary oooomph. Life can't be rosy all the time. And sometimes it's distinctly a darker colour altogether. Time for a cup of tea and a strum - in the summerhouse..... yes...... see you again soon, I promise!
Posted by barefootgypsy at 10:22:00 No comments:

The Ukulele Festival of Great Britain, June 2013, Cheltenham.... reigns as one of the best Ukafrolics of all so far, and likely to remain up there for some time, methinks... because it was simply FABULOUS.

It all started with the Friday evening welcome and get-together at the Exmouth Arms... this was the first big ukulele festival I had been to, and didn't know quite what to expect... I had thought this part of the proceedings would be in a big room... it would have to have been a very big room, if everyone turned up..... but no, as we reached the pub, having walked half-way across Cheltenham to find it, the fun was already starting to take place, outside in the beer garden and under a marquee. We were very early. But many were there before us. 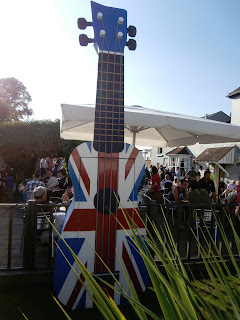 The first person I spotted was Barry Maz, of Got a Ukulele blog, with his little party of N'Ukers... strategically well-placed opposite the entrance, so as not to miss anyone coming in... clever, that... we hadn't met before, but were great pals in no time. One by one, other familiar faces and ukey pals were spotted. Ale bought, seats found, tee-shirt purchased... and already, little groups were strumming and singing. What to do, but to get up and join in. I had only taken one uke, my Kiwaya soprano, but a lot of people had several ukes with them, including banjoleles. There were ukes and people everywhere, everywhere the sound of strumming, and soon there were no seats left... a few more songs from the Big Busk Songbook..... a blues jam with Barry and the N'Ukes.... 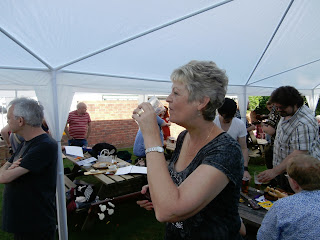 They said James Hill would be there... and eventually I spotted him - a ukulele hero indeed - if you've been asleep up a corner somewhere, just look on YouTube for his version of Billie-Jean, and be amazed.... I was introduced to him... oh, my.... I told him how I'd booked tickets and a place on one of his workshops the minute they'd gone on sale in November - he is SO nice, so pleasant and unassuming. I was hugely impressed. I'd have loved to have taken a photo but it seemed so.... crass. So I didn't. I should have - he would not have minded, I know.... but my evening was made, I had met my idol, and many more lovely people besides.

The longest day of the year, and the weather had kept a friendly countenance for us but eventually the dusk began to fall and so did the temperature... it had been a long day, we had a fair walk to do back to our hotel, and the Saturday promised to be simply magnificent. It was. I still smile just to remember it..... I'll tell you all about it next time. Don't go too far, now!
Posted by barefootgypsy at 15:00:00 2 comments: