Other Duties As Assigned - Rachel Manke talks about her first album! 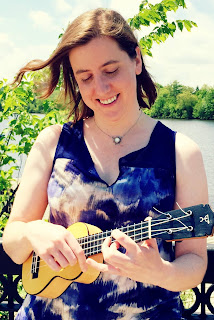 I've been a fan of Rachel Manke ever since I first dropped across a Youtube video that she had done - I posted it here, at the end of March. It's clear that Rachel had quite a following, and at last she has a CD, "Other Duties As Assigned", out just a few days ago. It's wonderful. It's full of the sort of 20's and 30's music I like, as well as a taste of something different to give a bit of extra spice, but - she has made these songs very much her own...

I asked Rachel to tell me her uke story - and this is what she said.


"I've been playing uke since 1999. Always thought it'd be fun to try. The personal joke was that Y2K would make us all nomads and a portable instrument might be a good thing to have post apocalypse.

I bought a $25 Hilo at the local store. Plastic fretboard, Hawaii decal, etc. Along with it I picked up one of Jumpin' Jim's early books and a Roy Smeck method book. Not long after I met up with a group not far away (this is in Rhode Island at the time) who gathered every month or so for beer, pretzels and ukes. This was at the home of Dave Wasser and Sue Abbotson who were among the founders of the Ukulele Hall of Fame Museum, which ran Uke Expos in the late 90's early 00's. It was a much smaller uke world then.

Through all that I met Joel Eckhaus (student of Roy Smeck) at one of these expos and I discovered the sort of uke playing that I wanted to do. At the time I was living about 4 hours south of where Joel was. He'd offered to have me come up for a lesson and I wasn't sure about driving 4 hours for a lesson. Thing is, the weekend of this festival was Sept 2001...days before Sept 11th. That fateful Tuesday I found myself going over the tunes from Joel's workshops over and over again. So, I phoned him up for a lesson...it seemed like a good idea now.

Itturned out that Joel and I are on a similar wavelength, I picked up the Roy Smeck style through an Eckhaus filter very well. We had about 3 lessons all said and done. Joel is the father of my right hand!

Other than that my learning has been a whole lot of watching and listening to other people. Not just uke players. Eventually just about everything I see ends up in some little note here and there. I can't say enough of how important it is to just expose yourself to other players and different styles (even if it's not your thing).

Now, all that happened and then I stopped paying attention for a few years. I worked for a number of years after college and then went off to grad school. That's when this current uke boom just exploded. Now, I'm reconnecting with all my old friends and making lots of new ones.

These days I've found my own voice and a bit of my own style. And I am having a blast finding new (to me) songs and different ways to make music and entertain. I'm playing festivals again and just this June I had the great honor of playing on a national radio show, A Prairie Home Companion. Can't get more fun than that!"

I had a wonderful Kickstarter campaign that let lots of people be involved in the project. My friend Steven Strauss played a wonderful upright bass on it, from afar! I got to play some standards, some lost treasures, some parodies that I wrote and even one song written by a dear friend. My little cousin did the artwork for the album (helltobreakfast.net). It's been so much fun putting it all together, all the little details and now sharing it!

For Rachel's take on old standards like I Can't Give You Anything but Love, Sweet Sue, Some of These Days, a bit of doo-wop, and parodies like "Has Anybody Seen My Mom" get a taste of her CD on the link above, or from Amazon, here....

HI! I hope you enjoy this blog and I'd love to hear your comments! But I know you'll forgive me if I read them over before I click the "publish" button! Thanks!