When people ask me how many ukes I have, I confess I cringe a little, because the fact is I have quite a few now. Many, many people have more - many more! But to the non-player it sounds a lot, and non-players do not understand the need. It comes down to exploration of different sound, getting the sounds that you want, and buying better quality instruments as time goes on. When you are not satisfied with the ukes you have, you have to go into every music shop you see, just to see if your ideal uke is in there, waiting for you. There is something very satisfying to come to realise that you no longer feel the need to do that, because the instruments you have are - just what you want. Nailed it.

Yes, I'm there. When it comes to wooden ukes, I am satisfied. What do I have? Well, the title of this post gives it away, doesn't it... In April I posted here about my solid mahogany concert made by luthier Dave Morgan (DJ Morgan Ukuleles). Rosie. I'm not generally one for naming my ukes, but as my latest was promptly dubbed Sprucey Lucy, That one had to have a name too. I was, and still am, thrilled with Rosie... but I wanted a spruce-top soprano. When Dave told me he was building some high-spec ukes in bird's eye maple with spruce tops, well... I knew I was a goner. 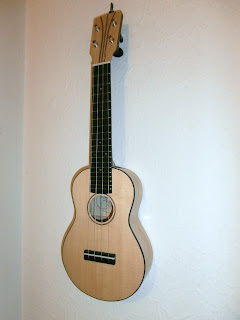 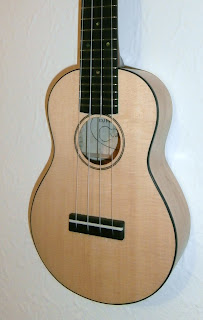 I couldn't wait to get my hands on one - as soon as Dave had got this uke finished and photographed I knew it had to be mine - I saw it, played it and snapped it up. It plays like a dream and it's loud. And it's beautiful. When I bought Rosie from him just a few months back I loved the subtle inlaid stripes on the headstock - well, Dave has refined the stripes in his signature headstock design into art deco curves now, and on this uke and its sister concert, the stripes are fashioned into three sets of parallel black lines, the two outer sets curving away - so classy, and they complement the ebony fingerboard and the black binding beautifully. 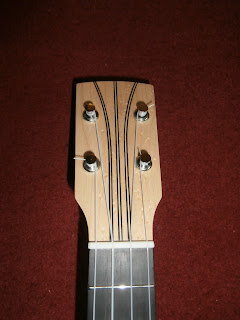 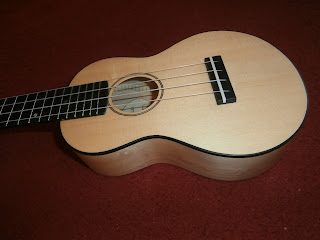 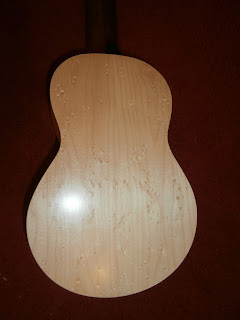 Dave Morgan is quite a perfectionist. He is a full-time luthier from Dudley in the English Midlands. The Black Country. His ukes are impeccably built, light, and sound amazing. Folk who know a great uke when they see and hear one are snapping them up. Barry Maz of Got A Ukulele blog had one to review a couple of months ago. Barry pulls no punches with his reviews - but he was highly impressed with Dave's build Read it here...

The fabulous Ian Emmerson has one. You know Ian Emmerson.... and he just told me... "I had to have it as soon as I tried it. He's an absolutely top-notch builder, it's my favourite uke, and it would be totally unsurprising if I ended up with another of his before too long." How's that for an endorsement?

Paul Culkin, a lovely player and singer/songwriter played my Rosie - and promptly ordered two ukes from Dave. He has them now, a concert and a baritone, and he is highly delighted with them.

Take a look on Dave's website, DJ Morgan Ukuleles to see more of his work and to see Paul playing one of his own songs on his new Morgan uke!

As for me, I play my DJ Morgan ukes all the time. I should put a video up shouldn't I... but it's late. I'll do one soon. At least you know all about Sprucey Lucy now.

Thanks for dropping by!
Posted by barefootgypsy at 14:36:00

HI! I hope you enjoy this blog and I'd love to hear your comments! But I know you'll forgive me if I read them over before I click the "publish" button! Thanks!